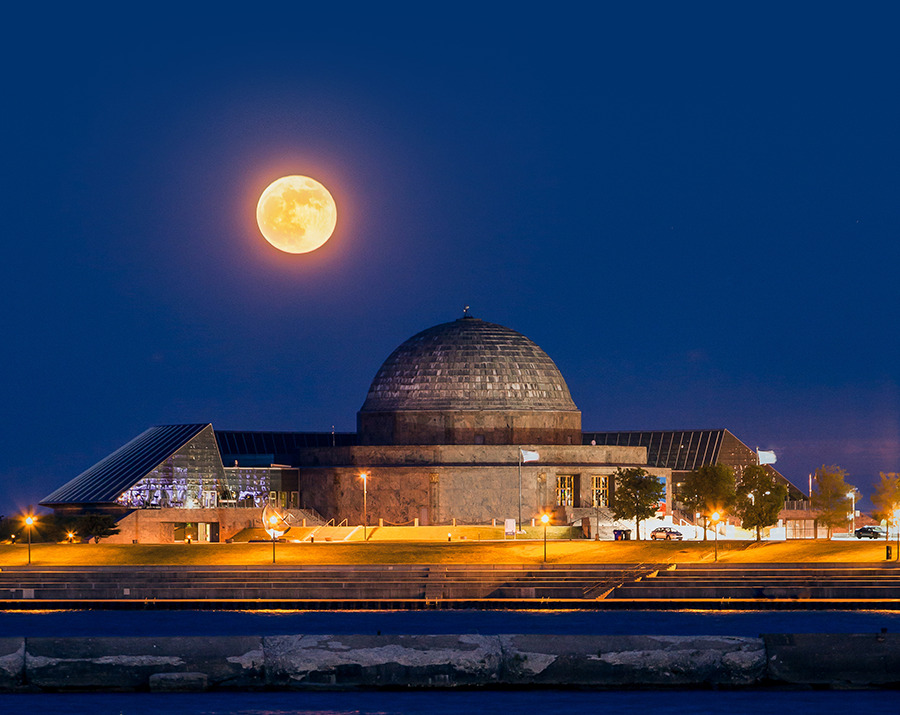 In 2021, two supermoons will occur! But what is a supermoon exactly? And why is it so “super”?

What Is a Supermoon?

Supermoon is a nickname that describes a Full Moon that occurs within 10% of its closest approach (300,000 km) to Earth. Astronomers refer to supermoons as a perigean Full Moon. In the past 20 years, there have been 79 supermoons which averages out to one supermoon every three months. Supermoons tend to cluster so it is not unusual for one supermoon to be preceded by another.

Full Moons vary in size due to the oval shape of the Moon’s orbit around Earth. Because supermoons occur when the Moon is at its closest distance to Earth, it can appear up to 14% larger and 30% brighter than a Full Moon at its longest distance from Earth.

A supermoon will look the biggest to the human eye when it is near the horizon. While a supermoon is not actually larger along the horizon, a strange effect commonly known as the “Moon illusion” occurs. Scientists are still trying to determine exactly what causes this illusion, but many generally agree that it relates to the Ponzo Illusion, which suggests that the human mind judges an object’s size based on its background.

However, it’s easy to confirm for yourself that the Moon is the same size at the horizon as it is above your head. One way to do this is to hold a ruler out at arm’s length and measure the Moon over the course of the night. Or, very simply, you can use your thumb. Hold your thumb out at arm’s length and compare the size of the Moon to the tip of your thumb, then do it again later when the Moon is higher in the sky. You’ll notice that the scale does not change.

Image Caption: Visual representation of what a micromoon (top) versus a supermoon (bottom) appears like to the naked eye from Earth.

How Do Supermoons Affect Our Ocean’s Tides?

During a supermoon, tides can vary up to 2 whole inches when compared to more regular tides. However, this small difference in tide risings does not create any significant changes in our oceans. Despite some popular beliefs, experts assure us that supermoons do not cause natural disasters.

Nope. A supermoon won’t make you crazy or cause unusual behavior in others. Research done in the 1980s and 2010s have found that supermoons have no adverse effect on mental health or psychological behaviors.

You can rest easy knowing that you can safely walk out of your home during the next supermoon!

What’s With Those Crazy Supermoon Names?

Wow! With so many wild and intriguing names it’s no wonder that our culture is fascinated with supermoons. It may be disheartening, however, to know that many of these elaborate names all mean the same, or similar, things.

For example, in the above supermoon names, “strawberry,” “snow,” and “wolf” are cultural references to the month that a Full Moon occurs. “Strawberry” refers to June, “snow” refers to February, and “Wolf” refers to January. Therefore, a Super Strawberry Moon is a supermoon that occurs during the month of June. These cultural names come from many origins, including Native Americans and medieval Europeans.

When “blood” appears in the name of a supermoon, it refers to the color of the Moon as Earth’s shadow comes between the Sun and the Full Moon (aka a lunar eclipse) which produces a reddish tint.

When Will The Next Supermoon Occur?

Mark your calendars, there will be two supermoons in 2021!

Watch exclusive live episodes of Sky Observers Hangout, where you can learn how to observe upcoming cosmic happenings, enhance your astrophotography skills and see celestial objects through a telescope virtually! Learn the difference between supermoons and micromoons from our astronomy educators. New episodes air every two weeks on Mondays.

We love looking up at our celestial neighbor! Snap a picture of a regular Full Moon, supermoon or micromoon and share with us on social media by tagging @adlerplanet + #LookUp for a chance to be featured on Intsagram or Twitter!