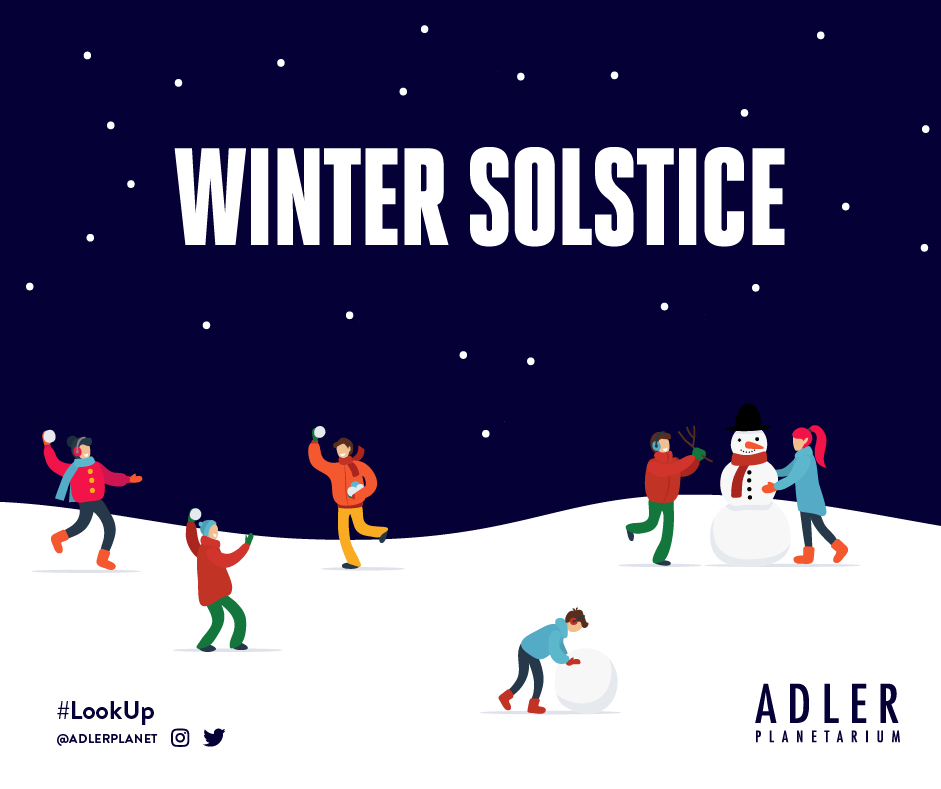 Header Image: Graphic representation of the Winter Solstice which will occur on December 21st, 2019 at 10:19pm.

The brightest planet, Venus, begins a run of many weeks’ worth of spectacular viewing in the evening skies this month, December 2019.

Venus starts off the month very low in the southwest after sunset, setting only about 90 minutes after the Sun. However, it moves higher in the evening sky each passing night. By the end of the month it sets nearly three hours after sunset. It also gets a little brighter every evening this month; and will continue to do so through the month of April 2020. The night of the 28th, look for Venus near the top of a very slim waxing crescent Moon.

Not far from Venus this month is the dimmer planet Saturn. Through the 10th Saturn appears less than ten degrees above Venus, low in the southwest sky. After that date the two planets appear side-by-side for a few nights. By the 14th, Saturn is below Venus in the sky; and by the 19th, Saturn is so close to the southwest horizon it becomes difficult to view.

Early risers can try spotting the planet Mars low in the southeast sky during morning twilight. It rises about three hours before the Sun this month. It doesn’t get much brighter than 1.6 magnitude this month, and soon fades as the early-morning sky brightens.

The planets Jupiter and Mercury appear so close to the Sun this month that they are difficult if not impossible to view.

The annual Geminids meteor shower occurs this month, peaking the night of the 13th and into the early morning darkness of the 14th. The bright waning gibbous Moon on those dates will wash out fainter meteors. However, Geminids tend to be bright – plus, they tend to be plentiful, with up to 100 meteors per hour under very dark, very clear skies. Expect to see far fewer if you’re viewing near city lights. No special equipment is needed to view meteors — just find a clear, dark, safe place, face east, and look up.

The winter solstice occurs at 10:19 p.m. Central time on the 21st.  For the northern hemisphere, this is the date with the shortest period of daylight and the longest period of nighttime; the Sun is at its lowest in the sky for the year. Late that same night and past midnight the following day, see if you can spot any meteors during the annual Ursids meteor shower, which peaks at this time. The Ursids have an expected maximum of only five to ten meteors per hour; but this year they occur when the Moon is waning and low in the sky, which will help aid visibility. Remember: the darker the sky, the better the viewing.

Finally, if you’re traveling overseas for the holidays, an annular solar eclipse takes place the 26th. This type of eclipse occurs as the Moon is near the farthest point in its orbit around the Earth and, thus, it does not appear large enough from Earth to completely cover the Sun, as during a total solar eclipse. The word “annular” is from the Latin word “annulus,” which means “ring.” In this case, the ring refers to the ring of Sun that shows around the Moon during the peak of the eclipse. Unfortunately, Europe, North and South America, and Africa will miss out on seeing this one. The annular eclipse will be visible in parts of Saudi Arabia, Qatar, United Arab Emirates, Oman, India, Sri Lanka, Malaysia, Indonesia, Singapore, Northern Mariana Islands, and Guam, and a partial solar eclipse will be visible from northeast Africa and the Middle East to much of eastern and southern Asia. Refer to mreclipse.com for a specific visibility map for this eclipse.  And, wherever you are, remember to never look directly at the Sun without proper safe-solar filters. There is absolutely no time during an annular solar eclipse when the Sun and Moon combination is safe to view with unaided eyes.