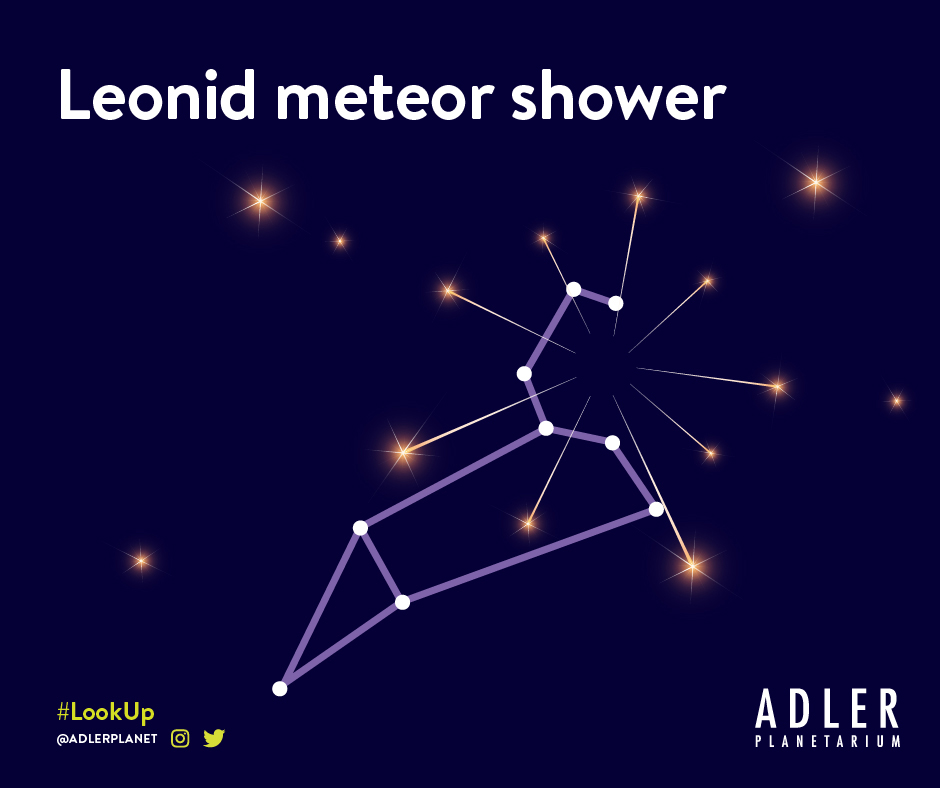 Header Image: Graphic representation of the Leonid meteor shower with the constellation Leo.

Evenings in the Chicago area are getting dark quite early this month, November 2019. Because Daylight Saving Time ended on the 3rd, the Sun now sets before 5:00 p.m. local time. It won’t be setting after 5:00 p.m. until late January.

Shortly after sunset this month, the brightest planet, Venus, is very low in the southwest sky. Not far from Venus is the second-brightest planet Jupiter. Between the 1st and the 25th, Jupiter appears higher in the sky than Venus – and they appear to be getting closer and closer each night. At their closest, on the 23rd and 24th, they are less than two degrees apart. After the 26th, they begin to move away from each other, and Venus appears above Jupiter in the sky. The evening of the 28th, Venus is less than a degree away from the bright edge of a slim waxing crescent Moon.

Once Venus and Jupiter get too close to the southwest horizon to be readily seen, look for the planet Saturn, low in the south-southwest sky in early evening. It’s not nearly as bright as either Venus or Jupiter; but it’s higher in the sky this month and doesn’t set in the Chicago area until after 7:00 p.m. The night of the 29th, look for Saturn near the very top of a waxing crescent Moon.

Normally Skywatch includes only sights that can be seen with the unaided eye. But this month there is a rare telescopic sky sighting the morning of the 11th. From sunrise to noon, the planet Mercury passes in front of the Sun as seen from certain locations of Earth, including Chicago. This is called a transit of Mercury. Unfortunately, Mercury appears so small that it’s not visible to safely solar filtered eyes. Don’t look at the Sun with the naked eye, and don’t attempt to view it through a telescope unless you or someone you know are very skilled at safe solar viewing through a properly solar-filtered telescope. Incorrect solar viewing can quickly cause blindness. Weather permitting, the Adler will have telescopes available for safe telescopic solar viewing on the 11th Head to the sidewalk next to the Doane Observatory for our transit telescope observing party. The next transit of Mercury visible from Chicago isn’t until May 2049.

The annual Leonid Meteor Shower occurs this month, peaking during the dark hours of the 16th, 17th, and 18th. The bright waning gibbous Moon on those dates will wash out fainter meteors. However, Leonids are known for occasionally being bright and having long trails. No special equipment is needed to view meteors — just find a clear, dark place and look up. A maximum of roughly ten Leonids per hour is expected if skies are very dark and very clear. 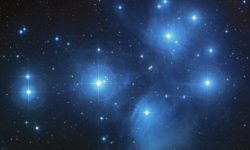 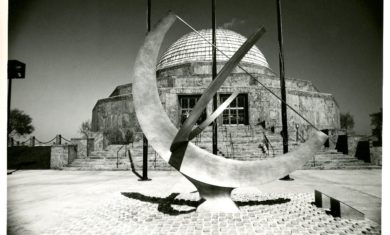 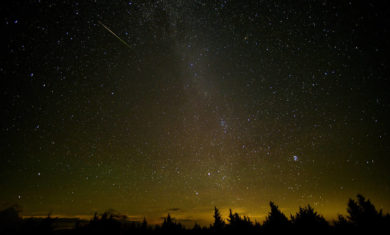