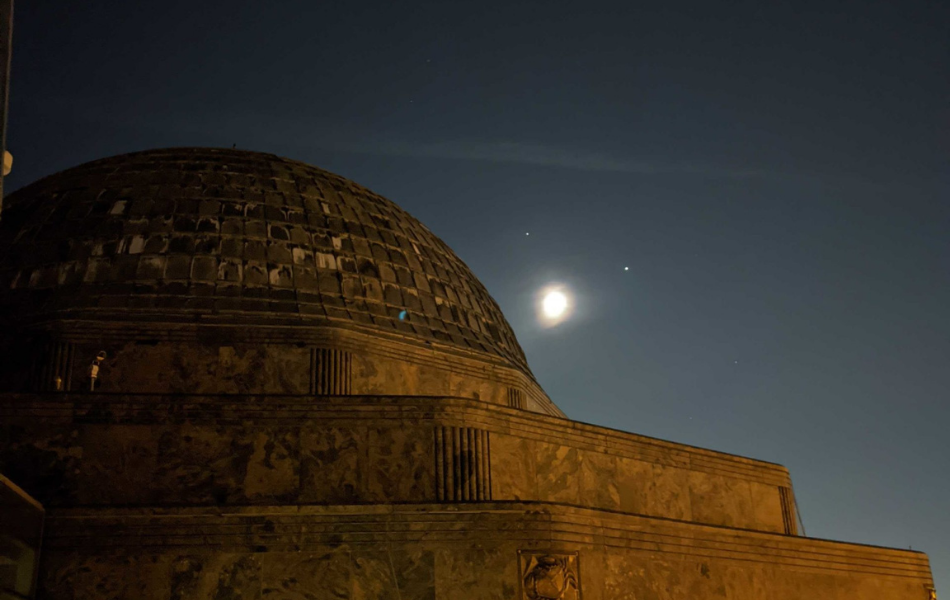 Header Image: The outside of the Adler Planetarium at night with the Moon, Jupiter, and Saturn brightly lit in the background. Image Credit: Mike Smail

If skies are clear, we’ll get a chance to see all the planets visible to the unaided eye—and, just maybe, a comet—this month, December 2021.

Comet Leonard, discovered in January 2021, may become the year’s brightest comet. Its closest approach to Earth is expected to be around December 12. But don’t worry—even at its closest, it will be over 20-million miles from Earth. It’s expected to get nearly ten times closer to Venus on December 18. Though comet brightness is extremely hard to predict in advance, there is a chance Comet Leonard will get bright enough to see with the unaided eye. The Adler is monitoring news on Comet Leonard, and if the chances to see it improve, we’ll tell you where and when—follow us on Facebook, Twitter, Instagram, and TikTok for updates!

The brightest planet in the night sky, Venus, is at its brightest for the entire year this month. Look for it very low in the southwest sky, about 45 minutes to an hour after the Sun sets. Technically, Venus peaks in brightness the evenings of December 2 through December 11—but it’s dazzling all month long. Venus sets in the southwest about 7:00 pm CST at the start of the month, and about 5:30 pm CST by the end of the month.

Extend your arm and make a fist. Now, stick out your index finger and your little finger. From the tip of your index finger to the tip of your little finger covers roughly 15 degrees. Using your hand as a guide, look about 15 degrees upward and to the left of Venus, to find the dimmer, but still visible, planet Saturn. Then, look another 15 degrees upward and to the left, to spot the undeniably bright planet, Jupiter. From December 6 to December 9, the Moon appears near each of the planets. The evening of December 6, a slim waxing crescent Moon appears just below Venus. The next evening—December 7—a slightly larger crescent Moon is below Saturn. The evening of  December 8, the crescent Moon sits to the left of Saturn, and is slightly below Jupiter; and the evening of December 9, the crescent Moon appears to the left of Jupiter. Saturn sets in the west-southwest about 8:00 pm CST at the start of the month, and about 7:00 pm CST by month’s end. Jupiter sets about 90 minutes after Saturn.

The Geminid Meteor Shower occurs this month. This year, it peaks the night of December 13 starting at 10:00 pm CT. Under dark and clear skies, several dozen meteors per hour may be seen. However, the Moon’s light may interfere with seeing dimmer meteors. So will viewing near city lights. No special equipment is needed to view meteors—just find a clear, dark, safe place, dress warmly, and look up.

Late in the month, starting around December 26, the planet Mercury appears just below Venus in the early evening sky. Though not nearly as bright as Venus, Mercury is readily visible to the naked eye. At their closest, the evening of December 28, the two appear barely four degrees apart. By December 31, the planet Mercury has moved upward in the sky, and now appears slightly above Venus.

After being too close to the Sun for easy viewing the past few months, the planet Mars is reappearing. Look for it during morning twilight—about an hour to 75 minutes before sunrise, very low in the east-southeast. This month, Mars is not as bright as the other naked-eye-visible planets, but it is brighter than most of the nearby stars. Near the end of the month, Mars appears near the star Antares, which means “Rival of Mars.” Antares is slightly brighter than Mars this month; both are distinctly ruddy-colored. The last morning of the year, on December 31, Mars is just a couple of degrees away from a very slim waning crescent Moon. Not long after it rises, Mars fades as dawn brightens.

The winter solstice arrives in the northern hemisphere the morning of December 21, at 9:59 am CST. We have a lot of cold weeks after this date, but the length of time the Sun is in the sky increases slightly each day thereafter until the summer solstice in June.

Watch the exclusive live episode of Sky Observers Hangout this December! On December 7 at 5:00 am CT, our astronomy educators will broadcast live from the Adler Planetarium’s Doane Observatory to answer your questions about comets, explain what comets are, highlight where in the sky Comet Leonard, a.k.a. C/2021 A1, will be visible, and show you where to point a telescope to see it. If the clouds cooperate, we might even broadcast a live telescope view of the comet. New episodes of Sky Observers Hangout air every month!