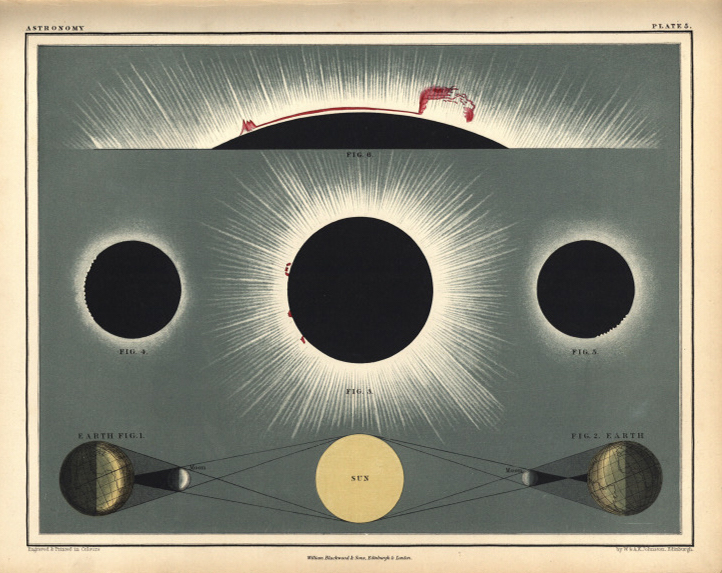 Header Image: Eclipse of the Sun illustration from the Adler Planetarium’s collections

There are several topics in astronomy that get lots of people excited: naked-eye visible comets, bright planets, auroras…but eclipses are generally at the top of the observing list for many of us. We love seeing the Sun or Moon look different from how they normally appear. This spring, we’ve got a partial lunar eclipse on May 26th, 2021 and a partial solar eclipse (as seen from the Chicago area) on June 10th, 2021 that you may want to set an alarm for, and get up early to spot.

How To View The May 2021 Lunar Eclipse

The Moon will be low in the southwestern sky when the eclipse starts at 3:47 am CDT. As the Moon begins to pass into the lightest part of the Earth’s shadow, the Moon’s color will start to change from bright light gray to a progressively deeper tan. Starting at 4:44 am CDT, the Moon will begin to encounter the darker part of the Earth’s shadow—looking a bit like a cookie with more of a bite taken out of it—and it will continue to get lower and lower in the sky. In our area, the partially-eclipsed Moon will set just before 5:30 am CDT. No special equipment is required to see this eclipse at all. Just find a safe spot near you that has an open view to the southwest away from trees or houses, and enjoy! If you miss this eclipse, the next lunar eclipse visible in the Chicago area is November 19, 2021.

A solar eclipse can only happen at the phase known as New Moon, when the arrangement in space is a line between the Sun, Moon, and Earth. When the lineup is exactly right and the Moon’s orbit intersects the Sun’s position in our sky, the Moon partly or totally covers the Sun. Solar eclipses can be partial or total, depending on whether the Moon covers part or all of the Sun. If the Moon is close enough to Earth in its oval-shaped orbit, it will be big enough to completely cover the Sun, but when the Moon is farther from the Earth, the size it appears in the sky is not large enough to cover the Sun. When the Moon is too far from Earth to cover the Sun completely, we call this an annular eclipse. The word annular comes from the Latin word annulus, which means ring, referring to the ring of Sun that is left around the Moon during this type of eclipse.

How To View The June 2021 Solar Eclipse

The solar eclipse on June 10 is an annular eclipse, but in the Chicago area, the annular phase is not visible. Only a small part of this eclipse will be visible here. The path where the full annular eclipse will be seen is in Canada, Greenland, and a bit of Russia. In the U.S., only a partial eclipse will be seen—specifically only in the northeast United States. For Chicago, the Sun will rise in the northeast already partly eclipsed by the Moon, and just 20 short minutes after sunrise, the eclipse is finished. You will need a clear view right down to the northeastern horizon to see this eclipse. You will need proper solar viewing glasses to safely view the Sun. Do not look directly at the Sun without certified solar eye protection. The next partial solar eclipse visible in the Chicago area is October 14, 2023.

If you have glasses or viewers left over from the 2017 solar eclipse, only use them if you have stored them away from light, heat, and humidity and you are certain they do not have any pinholes or punctures. If you aren’t sure if your viewers are safe, when in doubt, buy new ones.

Please note: To find exact directions and times to look for these eclipses for your specific location, visit this website. Due to COVID-19 gathering restrictions and ongoing changes to opening hours for city, county, and state parks, it is, unfortunately, impossible for us to suggest specific locations to view these eclipses in the Chicago area. If you are looking for solar viewing glasses, check out these from Rainbow Symphony.

Watch exclusive live episodes of Sky Observers Hangout! With our astronomy educators you’ll learn how to observe upcoming cosmic happenings, enhance your astrophotography skills and see celestial objects through a telescope virtually. If you are not able to tune in live with us, you can watch recaps of the episodes on our YouTube channel! Michelle and Adriana have shown us how to take better pictures of the Moon using our smartphones, what different star colors mean, and zodiac constellations! New episodes air every two weeks on Mondays.