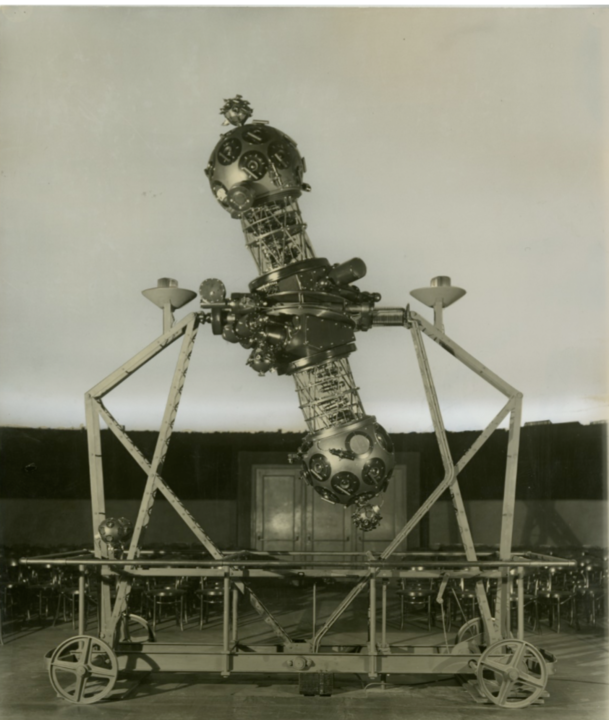 Header Image: The Zeiss Mark II projector can be seen here in the Adler’s original domed theater in the 1930s. Image Credit: The Adler Planetarium Archives

Written By: Mike Smail, Director of Theaters and Digital Experience

In January of 1970, the Adler Planetarium de-installed our original Zeiss planetarium projector (the first one in the Western Hemisphere) and shipped it to Jackson, Mississippi, where it was to be re-installed in the soon-to-be-constructed city planetarium. But, when the Russell C. Davis Planetarium opened in downtown Jackson in 1978, the installed projector was a Minolta S-IV. What happened to the Adler’s Zeiss? Why wasn’t it installed in Jackson? And where is it now?

Let’s Start At The Beginning

The Zeiss Mark II was in place for Adler’s opening, May 12, 1930. In 1960, Adler upgraded the projector to a Mark III, adding individual projectors for the 42 brightest stars, an upgraded Moon projector, and new chromium-coated, photo-engraved star plates (replacing the original hand-punched copper plates).

By 1968, Zeiss had released their newest large planetarium projector, the Model VI, and the Adler was in the midst of researching our next planetarium projector purchase. Coincidentally, that same year, William Clark, President of Observa-Dome in Jackson, Mississippi, approached the Adler to inquire if we’d be willing to sell our projector. Like many communities at the time, Jackson was attempting to access matching funding from the National Defense Education Act to purchase the projector. In order to meet funding timelines, Observa-Dome acted as a go-between, purchasing the projector from the Adler, and then selling it to Jackson.

December 31, 1969 was the projector’s last day in operation. Technicians from Adler and Observa-Dome spent the next two weeks carefully disassembling the projector and crating it for shipping. The Adler’s new Mark VI had arrived from Oberkochen, Germany, so we repurposed those crates to ship the projector to Jackson.

As previously mentioned, the Davis Planetarium opened in 1978, but with a Minolta S-IV projector. So why not the Zeiss? When the team in Jackson investigated the actual costs of re-constructing and updating the Zeiss, they found it would cost $230,000. When they reached out to planetarium manufacturers for new projector price quotes, they received an offer from Viewlex (then Minolta’s US planetarium distributor) that was about $100,000 less than Zeiss repair costs. Viewlex also offered Jackson $30,000 in trade-in for the Adler’s Zeiss. So, as a part of that sale, Adler’s Zeiss was shipped to Viewlex’s Long Island warehouse space, where it sat for the next year or two.

Viewlex Audio-Visual Inc. went bankrupt. The freight and storage company that owned their warehouse began calling up Zeiss planetaria around the country, looking for someone willing to purchase Adler’s Zeiss. One of their calls was to Sam Mims, one of the two Planetarium Curators at the Louisiana Arts & Science Center in Baton Rouge. Realizing the danger of this historic artifact being scrapped, Sam assembled a few interested parties (including his co-curator Wayne Coskrey), and agreed to purchase the projector. After finalization of the purchase, the projector was shipped to Sam’s father’s chemical warehouse in Baton Rouge, Louisiana.

At this time, the Louisiana Arts & Science Center’s planetarium was also a Zeiss Model III, originally installed as a Model II at Los Angeles’ Griffith Observatory. But Sam and Wayne didn’t have plans to use the Adler Zeiss for spare parts, they wanted to get it in the hands of someone who could properly preserve its historical value. For several years, the Baton Rouge group ran ads in a variety of astronomical and planetarium trade publications looking for a buyer. By 1987, they found that buyer. Don Greider, a solar engineer from Mechanicsburg, Ohio arranged to purchase Adler’s Zeiss with the goal of re-assembling it in his workshop. That was the last time anybody outside of the Greider family saw, or heard about the Adler’s Zeiss for over 20 years.

In the run-up to the 2008 Presidential election, the Adler was thrust into the political spotlight, as presidential candidate John McCain accused candidate Barack Obama of requesting a 3 million dollar earmark for the Adler to buy an ‘overhead projector’. As a result, we found ourselves making numerous clarifying statements to the press about the differences between a classroom overhead projector and the latest in high-end planetarium technology.

Don Greider caught an NPR report about this, and gave Adler a call, offering his services in manufacturing replacement parts for the now almost 40-year old, Zeiss Mark VI. Don also mentioned that he had Adler’s original Zeiss crated up in his barn/warehouse. This led to a series of phone calls, and even an in-person visit or two over the next few years, but by the end of 2012, Don had dropped out of communication.

On February 17, 2020, I received a voicemail, forwarded from the museum’s main line. It was Don Greider’s son, Ken. He was making arrangements to clear out the barn, and wanted to know if we were interested in purchasing our Zeiss. On February 29, a small group from Adler drove out to the Greider farm, southwest of Mechanicsburg, Ohio in an attempt to verify that it was Adler’s Zeiss, and to inspect the condition of the parts. So what did we find?

We found a series of large wooden crates. Inside of them were the center axle, two planet cages, and two starballs from a Zeiss III projector. Using shipping labels on these crates, we could track their movement between the projector’s various locations. We also discovered dozens of pieces of ancillary projection equipment: arrow pointers, constellation projectors, lamp housings, just to name a few. In the packing material surrounding the North planet cage, was a piece of the December 21, 1969 Chicago Tribune, confirming that this was Adler’s long-lost Zeiss.

After a bit of back and forth, we settled on a price, and purchased our Zeiss projector back from the Greider family. We made a second trip to the farm in mid-June, to pack up as many of the small pieces as we could fit in our Adler van. The third and final trip was at the end of June; it was to oversee the removal of the final four crates. One crate had been stored outside and was already starting to decay, so the 3,000 pound center axle piece had to be removed. While investigating options for doing so, we discovered a handwritten ‘Happy New Year 1970’ message written on the inside of the crate, and signed by several Zeiss Planetarium factory employees. We made a point to remove and save this piece of the crate for the Adler’s collection. After removing the center piece from the crate, our shipping contractor transported it to Columbus, Ohio where they re-crated it, and then shipped all four crates to the Adler’s off-site storage warehouse in Chicago.

What’s Next For The Zeiss Mark II

Since the return to Chicago, we’ve inventoried all the projector components, and now we’re determining how we approach projector restoration. Our eventual goal is to reassemble the projector for public display at the Adler Planetarium. So, stay tuned! It’s been an exciting journey already, and we’re just getting started. 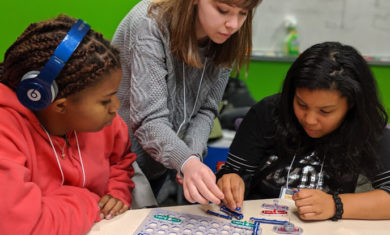 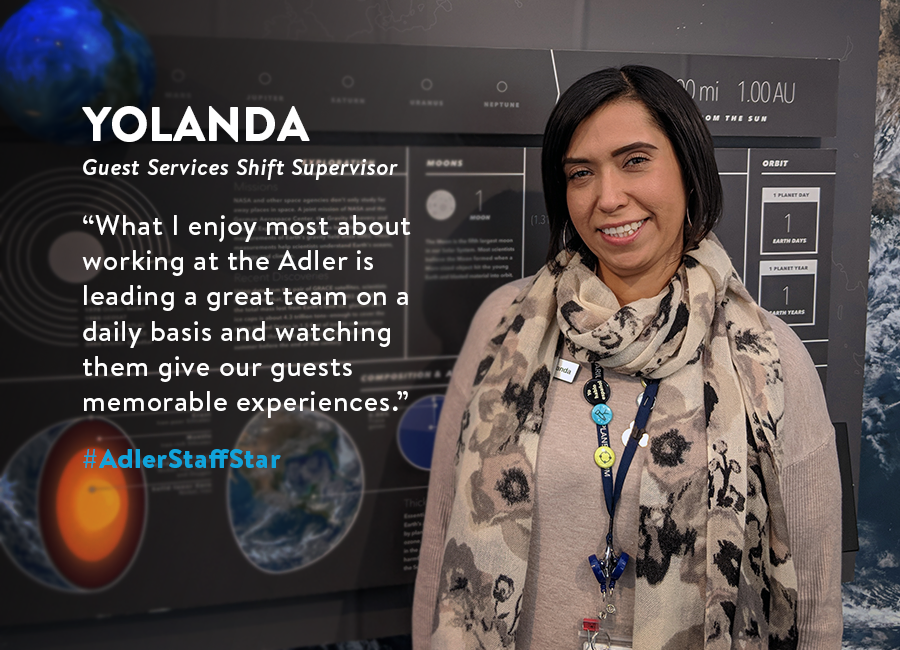 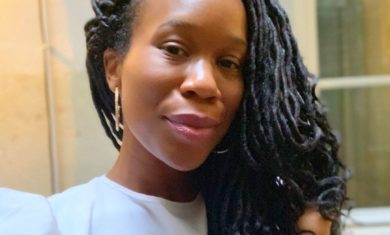